There is a big steel I beam in the ballroom that supports a corner of the house.   The false ceiling had been cross nailed to the wooden supports for the lath and plaster.   Removing the ceiling caused a bit of damage.

Lath was a silly idea in the first place – the span is too big.   I’ve cut the 3 original supports in the photo down to allow depth to screw some woodwool board on to support new plaster. 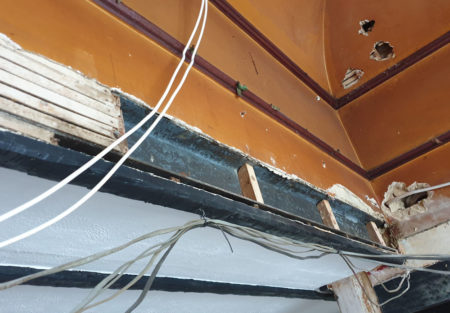 There are a lot of holes in the ceiling made by plumbers. Quite often they made a few holes before they managed to get one in the right place.   The lath is still well fixed and it would be a shame to strip the plaster back to the supports to replace the missing bits of lathe.   I’m thinking of screwing woodwool board to the back of the existing laths to support repair plaster.

More soon….  or at least some time later.   I came to a problem with how the mock tudor beam at the bottom of the photo was attached.   It relied on some bits I’ve already removed from the walls.

I found it tricky and came back a few months later.   I’ve used builder’s strap to secure the decorative beam to the wooden parts bolted to the beam.  It works well.

Finally some woodwool board screwed onto those pieces of wood has the beam almost ready for plaster.   It just needs a bit of lath to fill in the gap below the beam.. 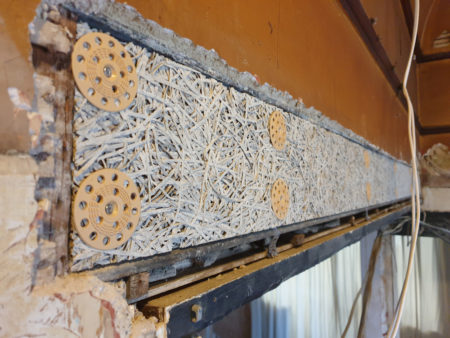