The oak window sill (needed to go in before plastering) was made by Cardington Joinery and is marvellous. 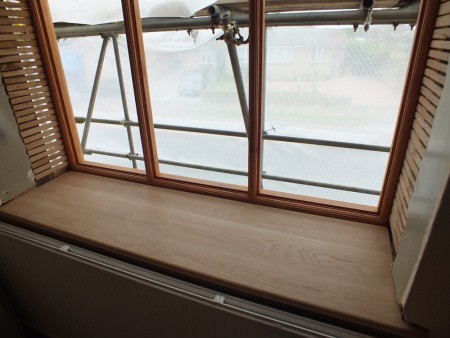 The timber above the oriel window was originally in-filled with brick then roughcast rendered (in a very early use of portland cement – yuk).  I wanted to reduce the weight of the window because the lintel over the window below has a pronounced bend.  Woodwool board would have been an ideal infill but it isn’t widely available and delivery would have cost £100 for the £6 sheet I needed, so I went for lath.

In hindsight the span is slightly too long for lath and it bent when the wet lime render was applied.  Then it sprung back as it dried so I might end up with a feature bulge. 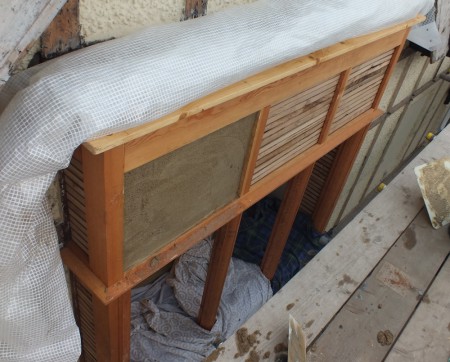 It didn’t go well.  The lime failed to set and after a week was soft and crumbly.  I suspect I let it dry too quickly, or it is possible the mix or some component was wrong.  Whichever It needs to come off and be done again and I’ll experiment first to make sure I have sorted the problem,

Plan B is back to the original plan using wood wool board.  I only needed small sections and used offcuts pulled from Anna’s skip.  Thanks Anna. 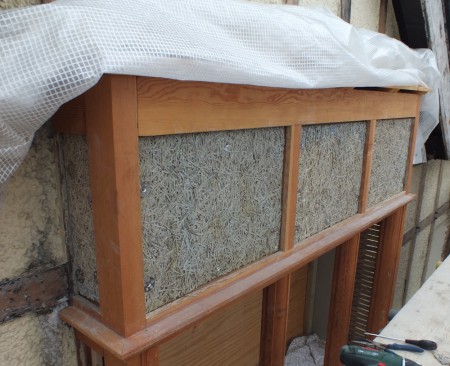 The lime failure turned out to be my fault.  The plastering sand is washed so is poorly graded and needed about 1:1.25 lime to sand compared to the 1:2.5 ratio I tend to use for mortar.

The new render was much stickier than the old, and the wood wool board turned out to be very much easier to render than lath to the point where I hardly dropped any plaster when doing the ceiling.   The first coat went on nice and flat and will dry (and be wetted) for a week before the finishing coat. 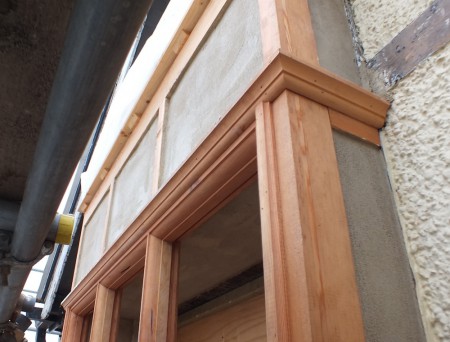 Next job will be fitting the windows.  But I can’t do that yet as I need access to tend the lime plaster inside.   Next job might be getting ready for the limewash and paint on the front as that needs to be done in the summer but it is already Autumn.

We have about 10m3 of wood from the Willow trimming and Cypress felling last year.  It has been knocking about in log form to allow it to dry sufficiently for splitting.  The Willow (trimmed outside growing season) is already dry enough to burn but the Cypress will need to season for another year.

I bought an electric log splitter (Forest Master FM10) and it is brilliant.  It got through all the logs in a day and a half over the weekend. 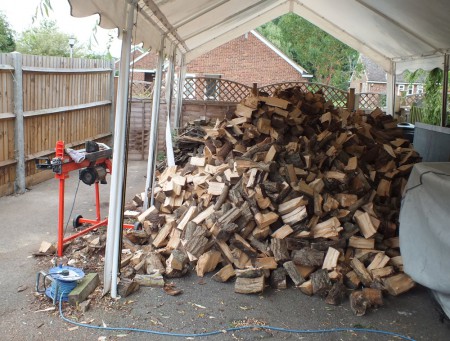 The log store will need to be enormous to hold all of the wood.   This one is going to be 7m long.  The ends borrow some features from the house timber framed gable, and I’m aiming for exposed rafter ends.  The wood is the same price no matter how nutty you get with the design, the dimension are intended to result in near zero wastage. 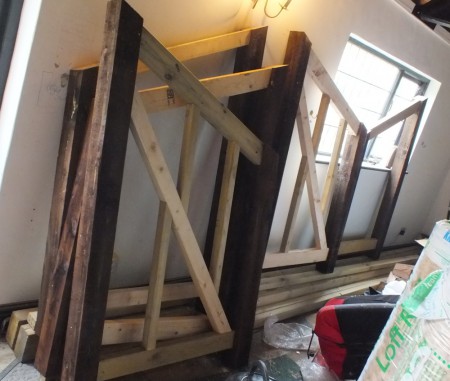 It has been raining all day, otherwise the log store would have been up by now.  It was only supposed to be a weekend project.

It only rained for half the next day but I decided I like rain and got on with putting up the frame.   It didn’t end up quite zero wastage as I cut some of the rafters the wrong way around. Later on the middle parts of the frame got uprights to match the ends as they make it easier to stack the wood. 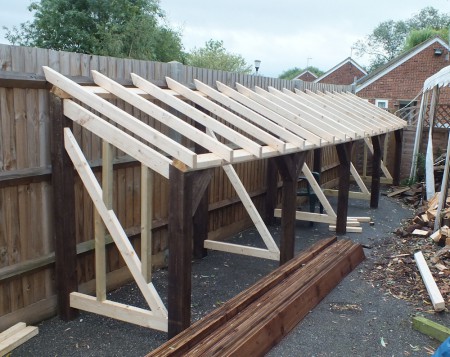 It took another day to nail the roof on and cut some pallets down to stand the wood on. It rained heavily before I finished the roof and the timber frame stayed dry with all of the overhangs and drip edges working as they should apart from a cock up where the feather edge board is joined which ought to have had a little gutter rather than a frame underneath.

Now I just need to finish off the trim at the bottom to prevent willow leaves from blowing in, then fill the store with wood.  It occurred to me it wouldn’t take much longer to make a car port when the tent needs to be replaced. 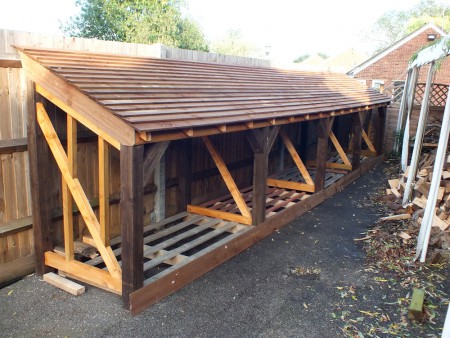 It took a further couple of days (between rain storms) to stack the wood store with wood and tidy up.   The size turned out to be quite a good guess with space remaining for only a few more logs.  It is a much more efficient use of space than the pile of wood that originally sat there. 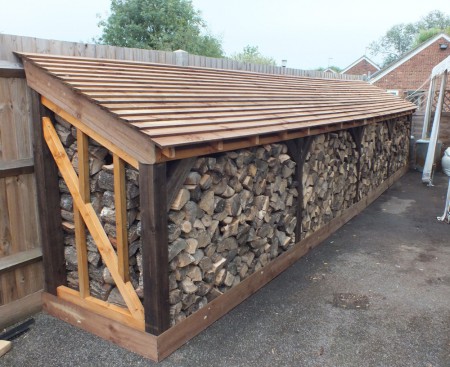 If it ever stops raining I’ll get back to painting and rendering.

I’ve been a bit quiet over the last couple of weeks.  I ran out of things to do so spent a whole week getting organised and ordering things.

One of those things was a bit of a luxury – a Clearview 500 wood burning stove.  The installer did a neat job and the stove is fabulous. 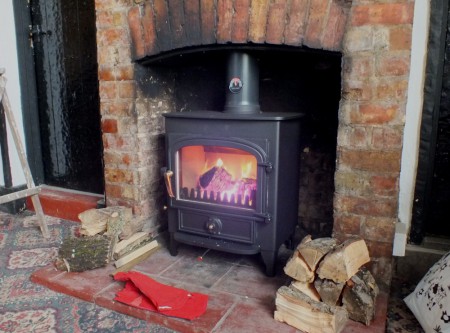 Other things included oak lath for the oriel window and, after half a day trying to nail it in place, a nailer.  The nailer is fantastic and the rest of the lath went on in less than an hour. 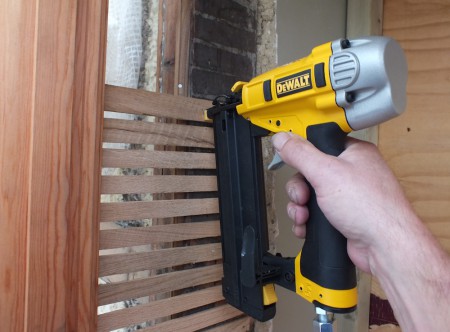 More on the window later – A new oak window sill is on it’s way from a local carpenter.  Once that is in place I can finish the plastering, then after the linseed oil paint arrives I can install the windows and finally remove the boarding.   The lime paint should arrive at the same time so I can finish off the front of the house in a colour other than magnolia.

The original upstairs bay window was rotten and couldn’t be saved.  (It turns out it is an oriel window as it doesn’t touch the ground.)   The new window frame was made by my cousin John and was installed today.

The profiles were recreated using spindle cutting tools modified to exactly match the original, and further mouldings were guesswork based on old photos of the originals. 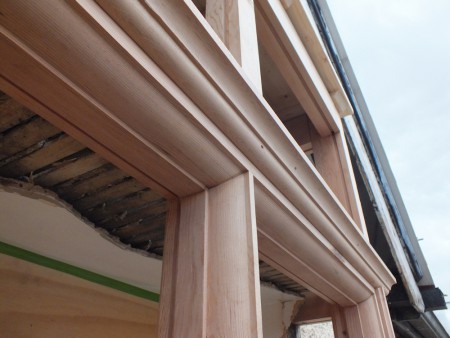 But the frame isn’t an exact copy of the old one.  It looked nice but It would be mad to copy something that only lasted for 100 years.  We’re having another go at it.

The original wood (a slow grown redwood) is resilient and would have been fine but it isn’t easily available these days so we used Douglas Fir.   The window will seal only to the inside face of the frame, and if (when) that seal cracks water will be directed into channels and some holes to a ventilated space below the window cill.  There are no horizontal surfaces – everything sheds water, and there are drip features and overhangs all over the place. 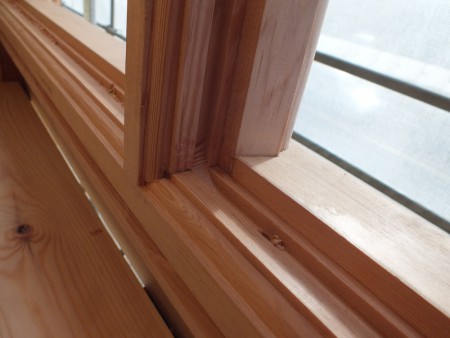 I like old stuff and conservation, but mostly that is because I like quality of workmanship and materials.  I think this is the best bit of the house.

There is still some work to do.  I’ll need to fit the crittall openers and leaded glass, then fill the remaining bits in lime to keep everything breathable.  Then secondary glazing to keep building regs happy. 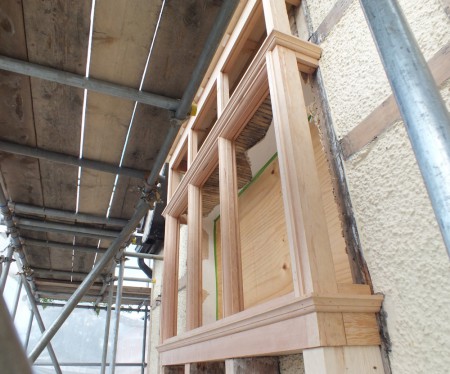 While measuring up for infill panels later I found I couldn’t measure as accurately as the window frame has been made.  It must be to 0.1mm tolerance.