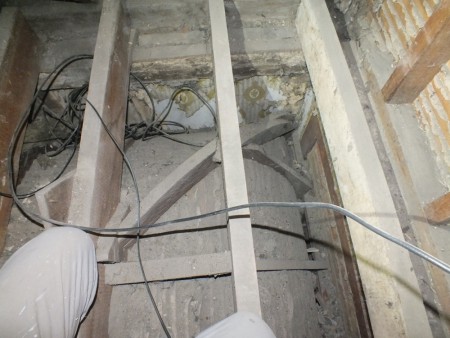 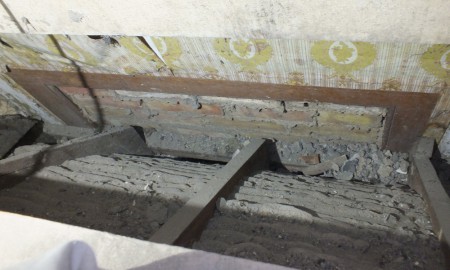 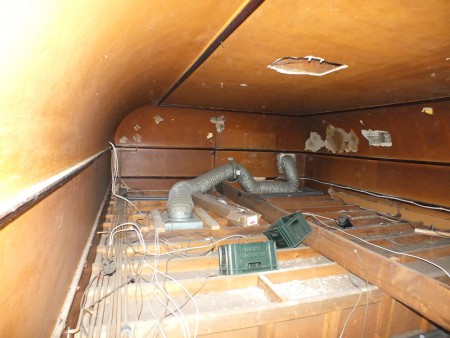 It’s taken a week to insulate the attic and the main loft space (and sort out water tank mountings).  I’ve used 300mm Earthwool which almost meets the 0.1 U-value required for a passive house.   There should be a good payback time insulating to that standard in the loft, and the insulation is unlikely to cause condensation problems as the loft is ventilated.

The first layer was laid at 100mm thickness between the joists and the second 200mm above the joists. 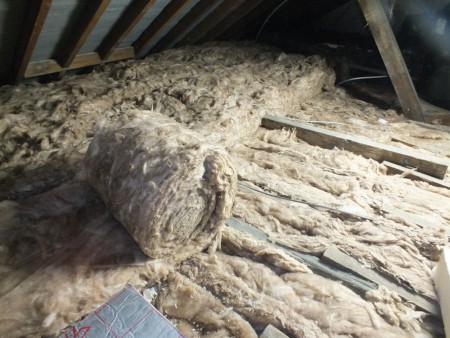 The walls of the attic are only 100mm so not quite to passive house standard.  The crawl space above the attic was horrible to insulate.   Insulation is horrible generally, and even with a good dust mask a lot of it must get into your lungs.   If I had the money I would have used sheeps wool (which is 4 times the price). 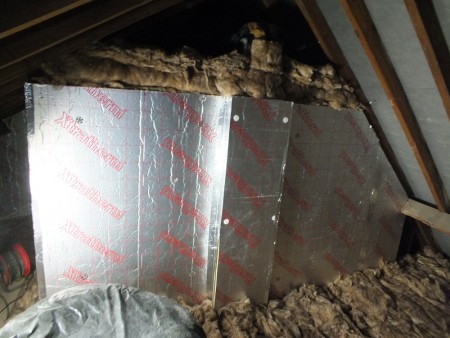 The ceiling beside the loft hatch was built by Georgians from quartered bits of small tree and is not very strong.  I’ve added a new independent structure above the loft hatch and added a section of loft flooring to make it safe to climb into the loft.  The loft hatch only has 100mm of insulation but that makes it heavy enough. 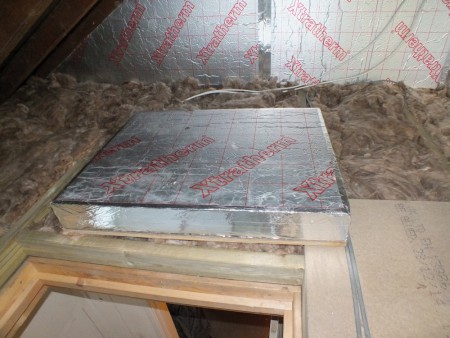 There is plenty more insulation to do around the house, but just a last section of eaves and the final attic wall remain in the roof space.

A proper passive house should have a heating energy usage of under 15kwh/m2 per year (measured). Before any insulation at all (apart from 100mm in part of the loft) this place was running at 110kwh/m2 (measured) and I should hopefully halve that.

On the other side of the rotten timber frame is the main bedroom.   It’s a bit dingy in there as the window has been boarded up for the last few weeks.

To avoid too much more inconvenience I’m building new stud walls on the inside before removing the outside wall.   There will be a 25mm ventilated gap between the stud wall and timber frame on the outside wall which will help keep the timber frame dry.  The studwork is 3 by 2 with 75mm Celotex infill. 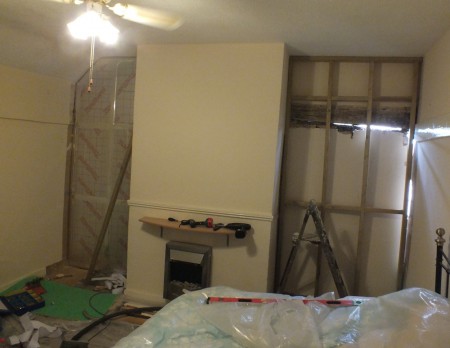 Exposed beams in the bedroom were plastered fairly recently, presumably mostly in the 1970s when old looking things weren’t fashionable.  The beam on the outside wall was plastered much earlier in lime, and it was this plaster that was holding the wattle and daub infill in place. 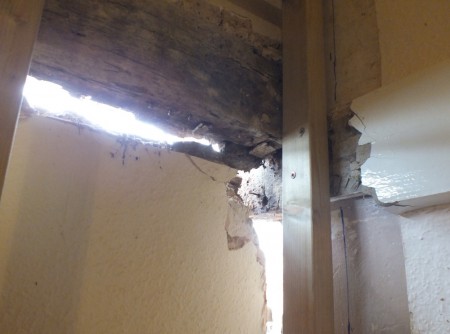 I don’t like plasterboard but it seemed cheap and convenient and would be at the back of the wardrobe so hardly mattered.  But It’s messy to cut, fiddly to match to oddly shaped walls, there is huge wastage, and the filler sinks and needs doing twice.   Next time I’m going to splash out on lath and plaster. 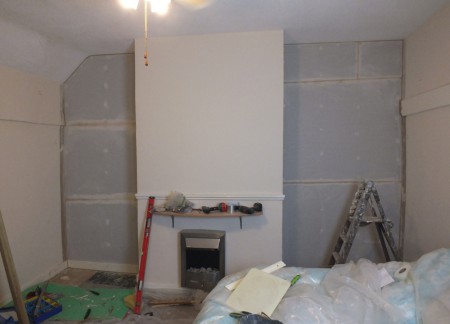 Installing the stud wall lost 4 to 5 inches of space from the alcoves.  The pole supporting the curtain that hides the wardrobe now has an industrial looking extension to bring it forward of the chimney. 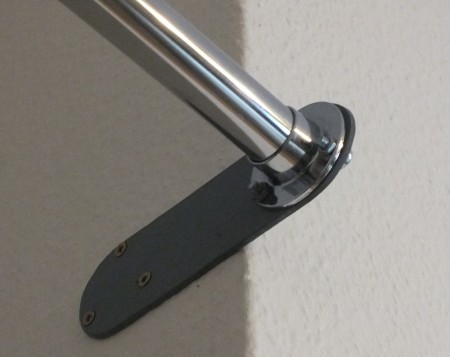 Finally, 6 days into a 3 day job, it’s all finished.   The plastic sheet covering the room was very effective at containing the mess.  The room will be decorated properly at some point when we get around to decorating, but I need to remember to rebuild the outside half of the wall first. 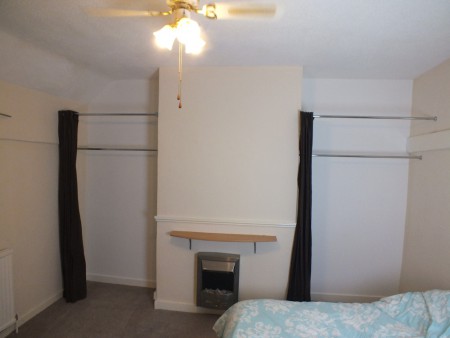 Well that was all very boring.   It’s the other side of the wall where the action is going to happen. 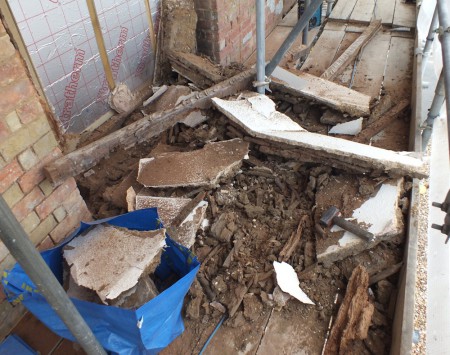 The exterior has been progressing well.  Another week of pointing should get it to the point where it can be finished without scaffolding.  The new bay window should arrive soon so I can get on with the front of the house.

It’s raining today which reminded me this is not a restoration project but a building regs change of use project involving insulation throughout the house.   The walls of the attic need to be 100mm Celotex, the pitched roof 140mm Celotex, and the loft space 300mm Earthwool.  Previously the space wasn’t insulated at all so it’s gone from one extreme to the other. 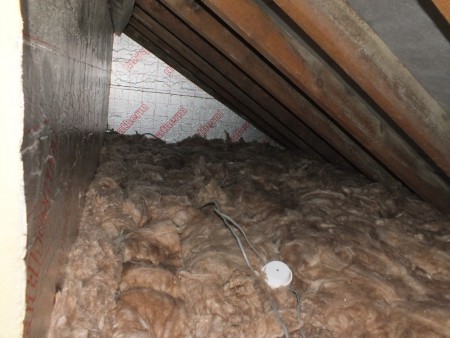 The Celotex is so thick it can be used as a structural material.   I’ve added a large cupboard on the side of the attic with the walls built with Celotex with the occasional bit of 2×2 where it needed extra stiffening. 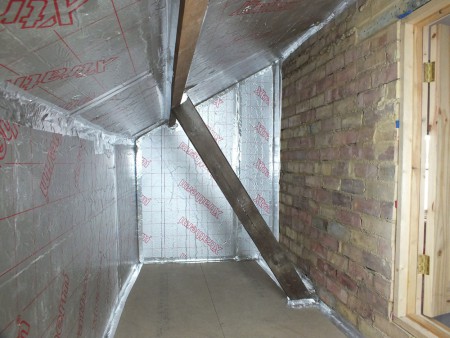 I don’t believe the insulation spec required by building regs will pay for itself in fuel savings before it is replaced again, but it is forced by legislation.   A lesser insulation spec using natural materials might have been better, but we do not live in environmentally friendly times.