I’m retraining to do building conservation work, so if you fancy some Arts and Crafts secondary glazing my email is at the bottom of the page.    Or if you prefer making your own here is a somewhat dimensioned pdf of the profiles together with a cutting plan that didn’t account for the saw blade width.

I’ve been messing around with ideas for secondary glazing for the last couple of years.  The mainstream secondary glazing seems really ugly and very expensive.    My bay windows don’t have any openers so I’m planning to make a fixed wooden frame with a similar profile to the existing frame.    Here is my prototype.    It doesn’t quite fit together because of the curve in the bay, but it’s close enough for me. 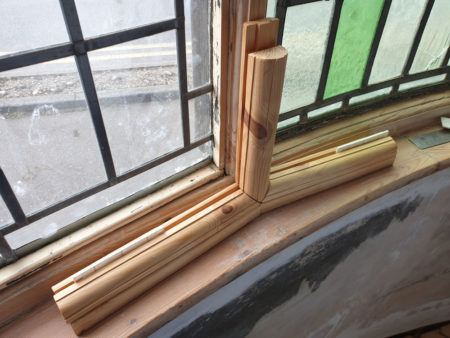 Last year I bought a table saw and router table for the work, and enough wood for both bays.  Today I have made a start and have been creating sawdust.       As usual I’ll update this post as I go along.

If you ever buy a table saw make sure it has a cast base with some chance of staying flat.  I’ll be buying another one before doing the big bay window. 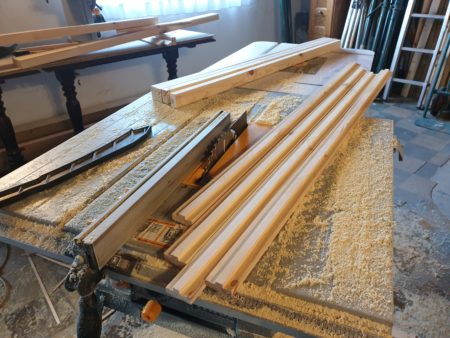 The profiles worked out well.   My dimensions are a little inconsistant, but there should be some adjustment possible during fitting.  The edge mouldings went through a redesign as I realised it would be better to attach them to the window frame rather than the cill and ceiling.

Annoyingly I can’t figure out how I did some of the radiuses on the protype.  I remember putting a lot of thought into it at the time but have forgotten all that now. 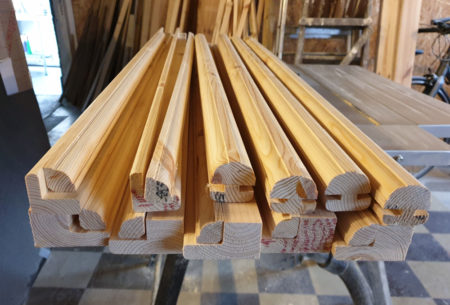 Fitting the glazing frame was time consuming.    The window isn’t a very consistant shape so it took a little imagination to fit the glazing frame in a way that would accept rectangular glass.    The bay is curved and a 7 degree angle kept cropping up, and not always where I was expecting it. 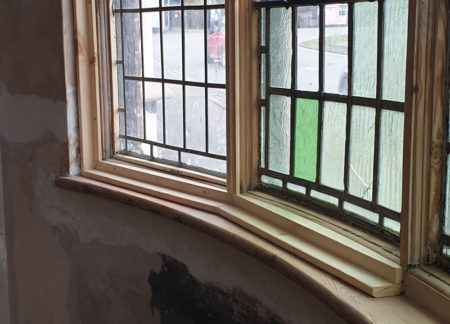 Adjusting things to fit and then fixing the glazing frame took 2.5 days in total, more than it took to make the profiles in the first place.  After getting everything perfect I added 1mm gaps between the bits of wood to allow for some expansion.   I’ll fill those with linseed putty.

Then after all that obvious progress in just half a day.   I finished off the prep and painted the inside of the window.   In the photos it looks nice in natural finish, but in the flesh it looks a whole lot nicer in black.   It’ll go more matt once the linseed oil paint soaks into the wood and dries.

The glazing at each end is not original.  I think someone skipped some rare curved Crittall openers and replaced them with flat glass with some lead stuck on.  The middle three panels are curved. 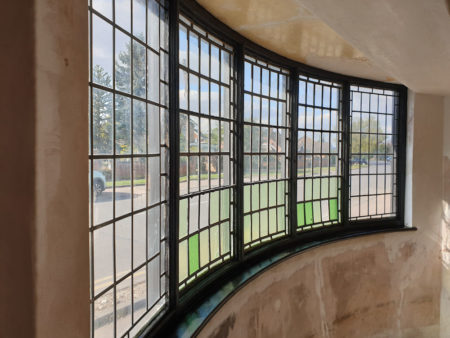 I maged to paint over the numbers on the secondary glazing frame pieces that told me where they fitted and was left with a jigsaw puzzle.

With the frame in place I started cutting the mouldings to size and now my brain hurts.  The parts are cut at either 45 degrees, 41 degrees or 49 degrees depending on the moulding width.  The 41 degree cuts also have a 7 degree compound angle to account for the curve of the window.   Gave up and had beer instead. 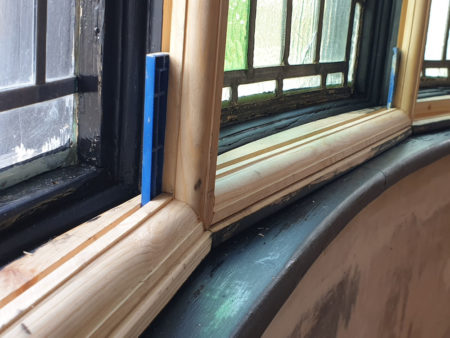 I found cutting the profiles to shape was much easier when I used an off-cut and cut the ends to fit the angle of the uprights then marked the saw settings on the cut end.   Once I had the angles it was easy to cut mouldings to the right length and angle.   The angles were different for every piece, largely because I set the glazing to fit the window and the window isn’t quite straight.

I’m very pleased with the finished secondary glazing.  It blends in and looks like it could be a part of the original window, and will likely disappear completely once it’s black.   I think the glass will stand out much more than the frame being faceted rather than curved, but I’ll wait until I’ve finished the big window in the next room before ordering the glass.  This job has taken 7 days so far, and it’ll be interesting to see how much quicker I get on the big bay. 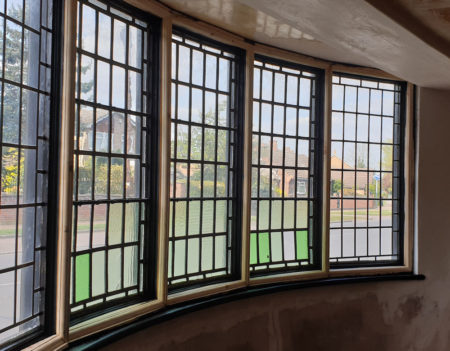 Slow updates – I’ve been in Sweden again.   I painted the front windows when I moved in 5 years ago, but it turns out modern oil based gloss paint is not UV resistant and the paint cracked after only a couple of years.  Problem is when you have cracked paint you need to remove it (and everything underneath) before repainting.

The front windows have very fiddly profiles and it took about 3 days to remove the modern paint with a heat gun.   Linseed paint is UV resistant and tends to dust rather than crack and just needs another splash of paint rather than stripping off, so I’ll be repainting in linseed so I can avoid doing any stripping ever again! 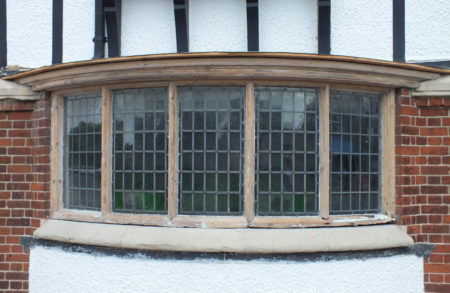 When I first moved in I thought the windows were beyond repair, but looking at them now I see window frames in really good condition.

I guess the difference after 5 years is just confidence and knowing what can be done to repair them.  There is just one sill that needs to be replaced and a couple of mullions that will need some new wood letting in.   I’ve got a bunch of photos of the rotten sill and they are all in focus but appear out of focus.  The camera has seen much worse and I’m not sure why it is objecting now. 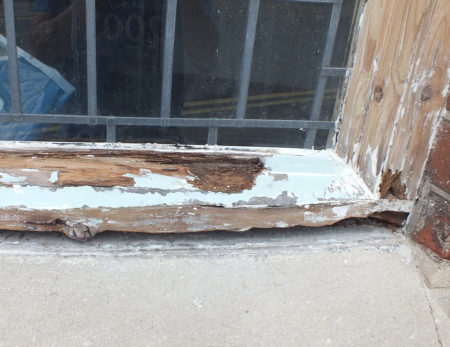 Maybe the camera was right.  The sill was quite rotten and I ended up removing it right back to the inner face of the window.  The rot in the mullions has been cut out at an angle to allow water to drain when the finish cracks.

That committed me to the scary bit – it would be my first time replacing a window sill, and this one is in a curved bay which complicates things.   I practiced on modern wood before attempting the repair. 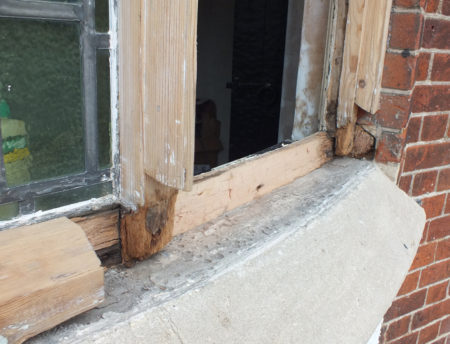 The new sill was made from the sill of the original sash removed from the back bedroom – 100 year old wood is much more durable than the stuff available today and also much harder to cut.

The curve was cut with a bandsaw and the taper added with a planer.   Repairs to the profiled mullions were cut with the bandsaw.  A new box of chisels was involved too.   I’m quite pleased with myself – some tidying still needed but it looks the part. 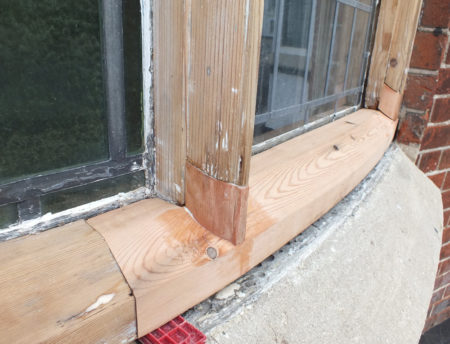 The gaps and cracks were filled with linseed putty and the first coat of linseed oil paint is looking fabulous.   I went for black to match the rest of the woodwork on the facade and to balance the top-heavy look of the half timber upper floor.  I prefer it to the before photo of the facade here, but it doesn’t seem quite right yet. 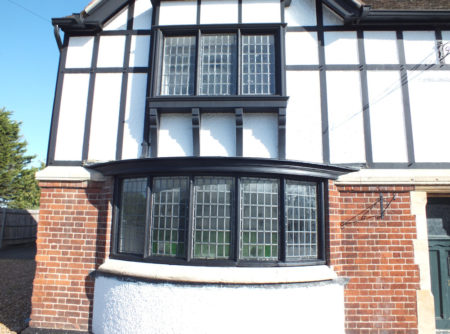 I still need to fill around the window with lime mortar, then paint another coat or two.   Also the lead roof still needs to be fitted.  I’ve been stripping the inside of the window on and off as the profiles look prettier without 1mm of paint, but that will be a fill in job as I’m determined to work outside while the weather allows.