I had originally hoped to build a garage this year, but that’s looking like it will be a couple of years away while roof troubles in the house are fixed.  The MG and Rodeo leak and their floors are sodden.

A marquee from Gala Tent will hopefully serve as a temporary garage for this winter.   It is held down by 12 ratchet straps attached to rebar fixed with resin into the tarmac.  Hopefully it won’t blow away and will withstand the willow for a few months.

Edit 6 years later – it did brilliantly!    Would recommend Gala Tent who supplied a replacement roof covering in 2020. 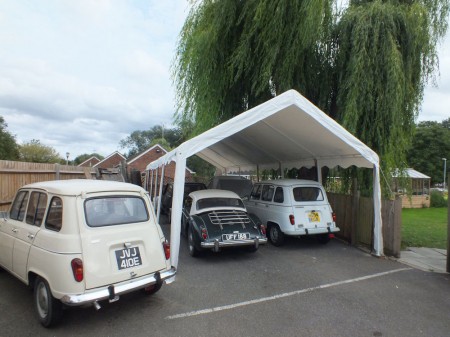 Back in the main house, the roof space above my bedroom is completely enclosed by brick walls and there is no access hatch.   I removed a brick from the attic room wall to have a look inside.

The space hasn’t been touched for over 100 years.  There is no insulation in there at all – no wonder I was chilly last winter!   I’ll install an access door from the attic to fit insulation.  The structural engineer wanted to see in there so I’ll put the door in before asking him around to look at the barn roof. 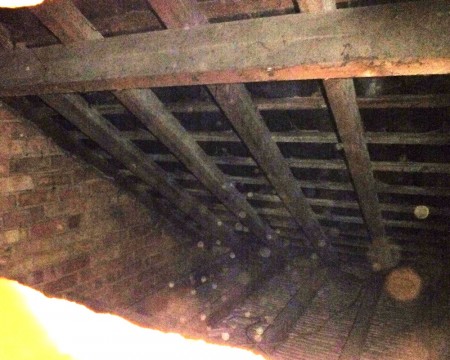 I have spoiled the attic decoration a little.  The lintel is in and I need to wait for the mortar to dry before knocking a doorway through.  The wall on the other side of the attic is a stud wall which was easier to knock through.

The roof covering through there is not in a good state.  I’m inclined to get some scaffolding up next year and get the roof and other external work done.   The structure isn’t rotten but the nails holding the tiles have rusted away and many of the tiles have slipped which makes it difficult to do local repairs. 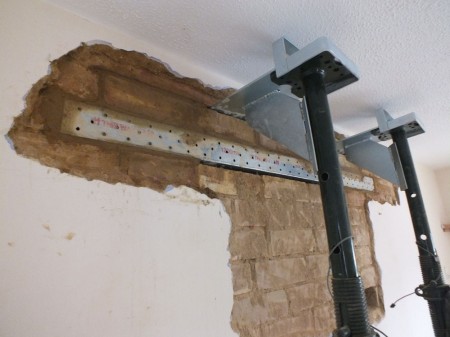 I saved around 45 bricks from the hole and they appear to be the same as the bricks used in the external walls.  Saves going to the reclaimed brick place. 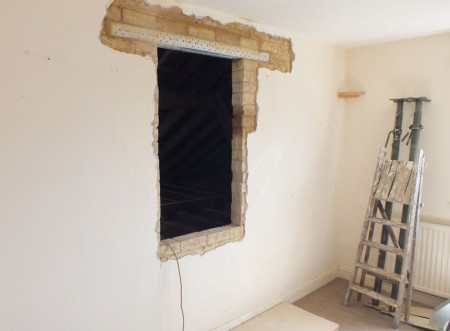 The access door doesn’t go all the way down to the floor because the ceiling on the other side of the hole is a lot higher (and there will be 270mm of insulation on top).   That’s the thing I want to chat to the structural engineer about. 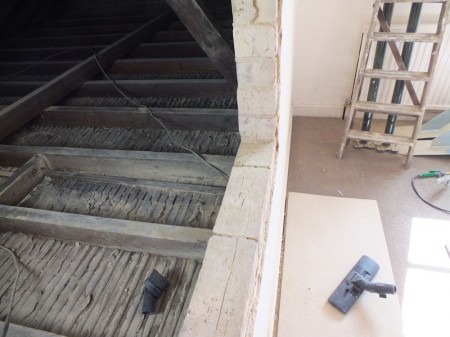 In the meantime the attic is a useful bedroom so I’ll put some door frames in and redecorate.  Later a substantial amount of insulation.

Oh dear,  the barn roof turns out to be a bit iffy.

The roof has some nice oak beams but they turn out to be mostly decorative.   Normally pretty oak beams would form part of a roof truss, but the principal rafters you might expect to see in a roof truss are missing here.   There are a couple of purlins which are supported by posts back to the middle of the the tie beams which have become bendy as a result.

The roof spread (leaning walls) looks like it may have been caused by a lack of attachment between the tie beams and the wall plate (bit of wood on top of the walls).  Some attachments were added in 1983 (I found a newspaper stuffed in) but they aren’t perfect and the movement is still ongoing at around 1mm/year.

I’ve stripped the plasterboard from the inside of the roof to see what the structure is.   Fixing it will take some thought.   Probably putting back the structure you would expect to see and adding a bit of steel to join the crusty bits together.   It’s all very annoying.  Putting a kitchen in would have been enough hassle. 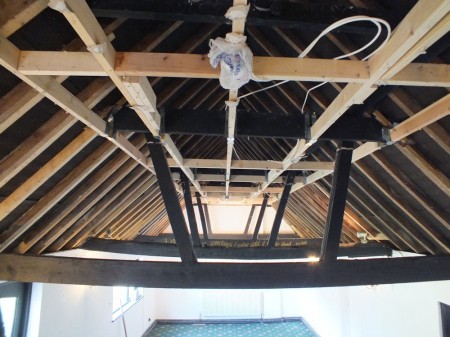 We bought a kitchen on eBay a year ago and yesterday arranged it in the barn to work out how it would fit.   Here’s an artist impression of what it might look like when it’s finished.  We can use it to help chose colours.

We plan to clear the barn next week to look at the roof spread and start fitting insulation and services prior to installing the kitchen. 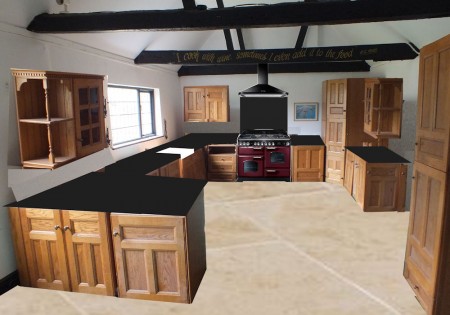 Later on there was a change of plan – the kitchen is going to stay in the kitchen and the barn will become an outbuilding.