The remainder of the greenhouse arrived this week, but as the weather was not looking good first thing Saturday morning I bought a cheap concrete breaker and dug up the ugly part of the concrete slab. 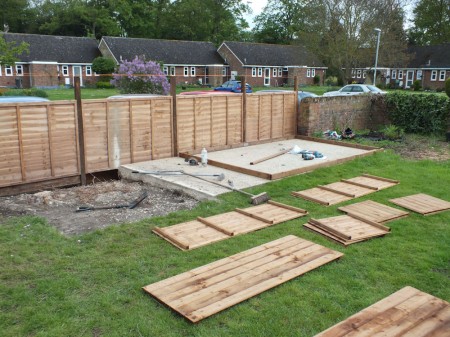 With the skip full and the weather nicer we started assembling the greenhouse on the remaining part of the slab after lunch.  The slab is in a perfect position to have sun all day long.   We gave up at 18:30, both exhausted from moving all that concrete. 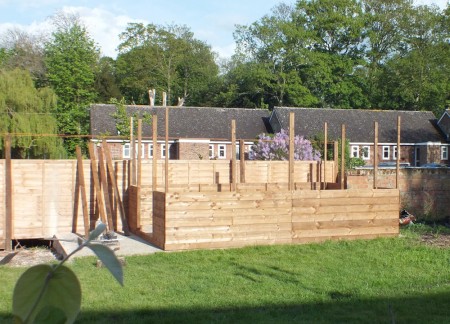 The concrete moving caught up with us on Sunday. 🙂  1.5 days in the glass is in the sides and the roof started.   The instructions are terrible so we’re making it up as we go along from here. 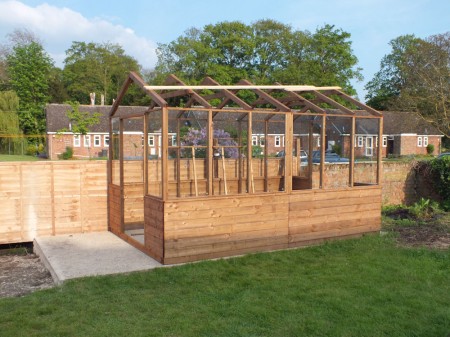 2.5 days in and the roof glass is mostly in.   It takes trained professionals 2.5 days to erect the greenhouse so we’re only a day out.  The scaffold tower base was really handy for installing the roof panels. 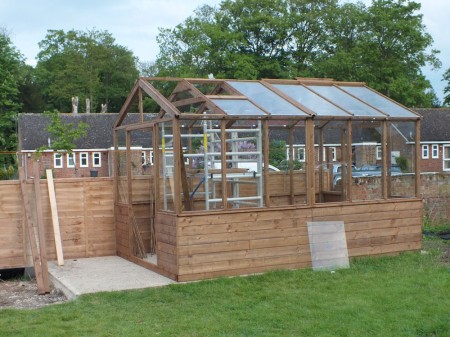 It took another day to finish the greenhouse.   I haven’t seen Kae since – I think she’s moved in there.   I still need to make some staging and fit some guttering to the rear where it drips on the fence. 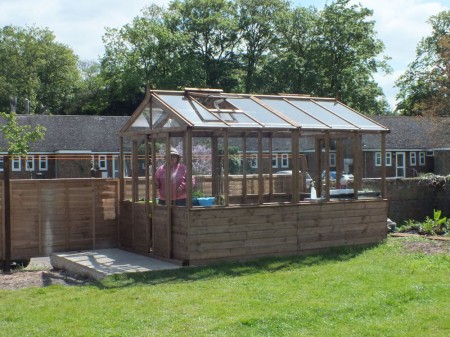 Next job is to finish the fence.  From there driveway then  finally the kitchen!

The damp in the kitchen walls is off the scale of the damp meter I am using. One of the many causes was that the flaunching in the drain outside the kitchen had failed due to water falling through misaligned pipes wearing the mortar away.

The sink drains via a tortuous route into the grey outlet at the top left of the photo, then the water falls in the gap (just to the right of the spade) and back through the kitchen wall just underneath the sink. 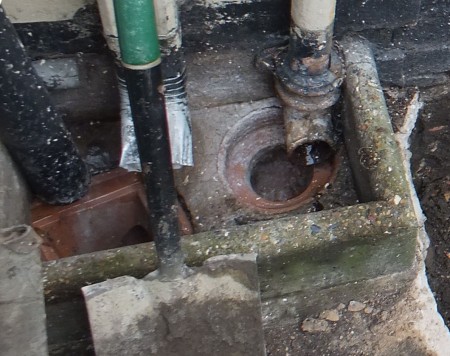 The builder next door suggested a strong mix of 1:1 cement and sharp sand, and tapping the cement to bring the ‘fats’ to the surface to make the cement smoother and stronger.  He gave me half a bag of cement and some sharp sand.   It occurred to me later that flaunching around drain pipes without much access wasn’t necessarily the easiest job for my first time working with cement (I’ve never owned a house before).  But it turned out OK.  It was splashed with water shortly after it was done which is why it is a bit blotchy. 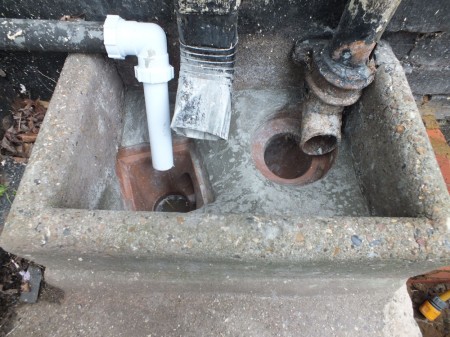 I still need to re-align the drain pipes.  The modification to the kitchen sink drain will be temporary.  Kae has decided to move the kitchen into the barn.

I submitted a form to discharge the planning conditions last weekend.   It takes ages to decide on which bricks and tiles to use.   In the end I just picked some but have changed my mind already.   We also have general agreement with building regs about what we need to do as part of the change of use.   Things might start happening in a few months!

Meanwhile the fence at the back of the garden wasn’t in very good condition.  It turns out 2014 was a very bad year to order a new fence.  Supplies of fencing dried up after the storms in January so the new fence took a while to arrive. 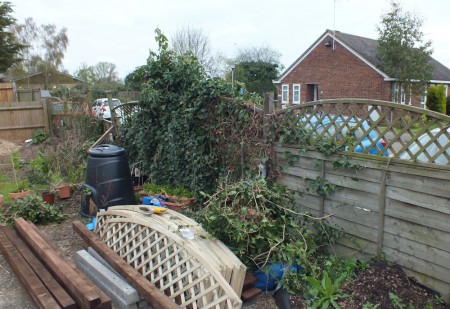 We started putting in the new fence this weekend.  It’s maybe 4 inches higher than the old one which had slipped a bit and was generally falling down.  The increased height is just enough to hide the top of the cars that started parking behind it after the messy willow was trimmed. 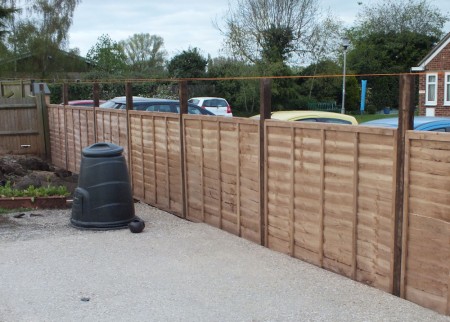 Kae did a fabulous job cleaning the concrete slab ready for the greenhouse which was to be a project for Easter bank holiday weekend.  But unfortunately they have so far sent only half a greenhouse.

7 weeks later at the start of June the fence was (nearly) finished.   The diminishing roof lines of the house, barn and greenhouse work well from the main road too. 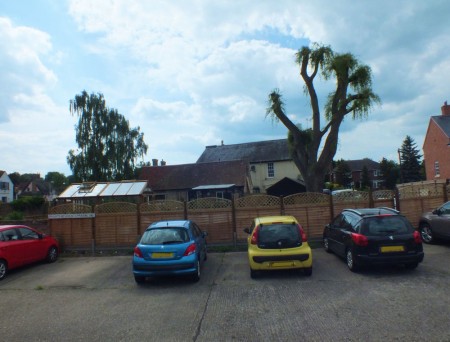 Here is a before photo from November 2012.  It’s a parking area for the Wellsfield bungalows but nobody used to park there because of the tree mess.  Neighbours are much happier now.  They have suggested the willow could be cropped a little lower next time – it doesn’t seem to have any trouble growing back. 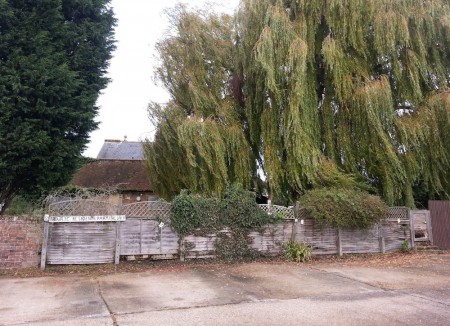 Colin from blunham.com sent photos of the Salutation taken from the church tower.   This time I’ve overlayed the photos and cropped them to the same size.   They show how the house was extended sideways and upwards in around 1910 and a previous pitched roof extension in the foreground removed.  Also they show a flat roof toilet block assumed to date from the 1960s.

The first is a coloured postcard dated circa 1900. 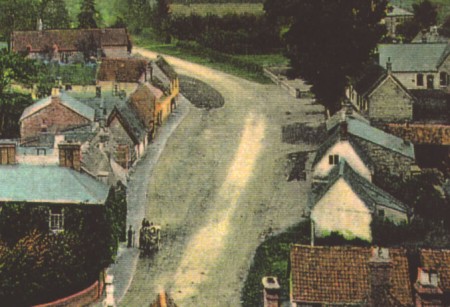 The second photo was taken by Colin in 1987. 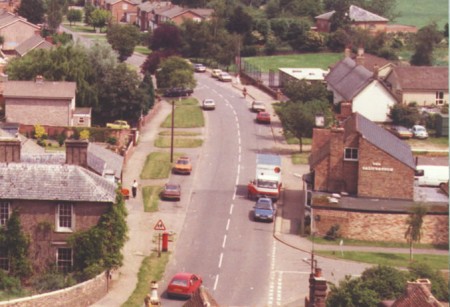 The gable was painted (in magnolia!) after 1987.   I had assumed the wall on the flat roof area looked ugly because they used inappropriate materials.  A closer look suggests they made a lot of effort to use hand made bricks and to match the gable.  The wall only looks ugly now because the gable was painted later emphasising the flat roof extension.

The wall in front of the flat roof extension has a bend in it directly below the window.  The bricks to the left are a different colour.   I’ve not figured out yet whether the bricks are part of the extension visible in the first photo, or if they are part of the garden wall that may have replaced it.