Drains have been a problem since we moved in but I need to fix the damp wall in the kitchen before I go much further with that.  The drains tended to become blocked in much the same place in the yard, but much less often since the willow was trimmed.

It turns out the kitchen drain had a botched concrete joint and no rodding access.  Later on a land drain was installed by knocking through the pipe and concreting in the new connection. Tree roots had found their way under the concrete and filled the drains with roots. 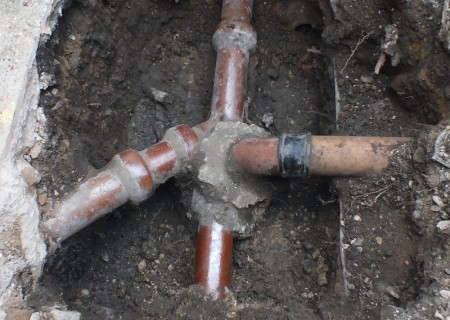 Replacing the defective joints with an inspection chamber was fairly straightforward, but lowering the hopper is taking a lot more thought.  Ideally it would be at the bottom of the trench as that would hide the pipes and keep the kitchen wall dry, but I don’t want any overflow to end up in the trench. 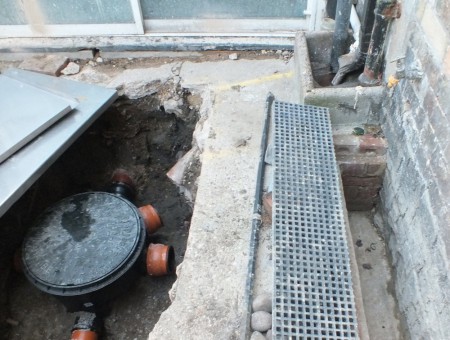 I ended up building a retaining wall with a 2 inch gap to the kitchen wall with the side open to the trench that runs around the house. It is just enough gap to clean out with a stick and I’ll put a cover on top to keep leaves out.  The gully and hopper are set to ground level and will have an edging behind so any overflow will flow into the yard drain and not the trench.  All the drain pipes still need to be realigned. 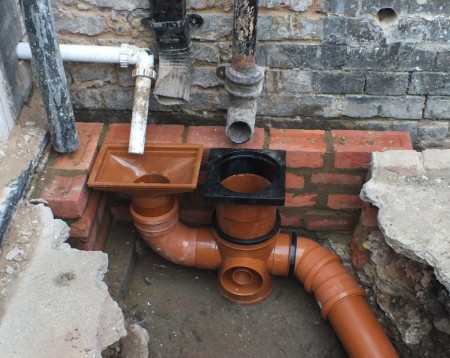 Finally the land drain has been brought closer to the inspection chamber to allow ground levels beyond to be raised a little, and I’ve added a new hopper for a gutter on the shed and a pipe to extend to the barn gutter later on. 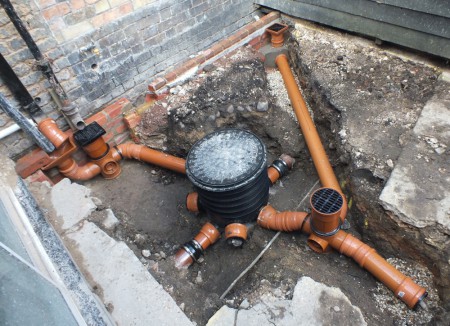 The building inspector was happy so I could move tonnes of earth back into the hole.  You can save money on pea shingle by using wooden shuttering close to the pipe and filling the pipe side with pea shingle and the other side with earth. 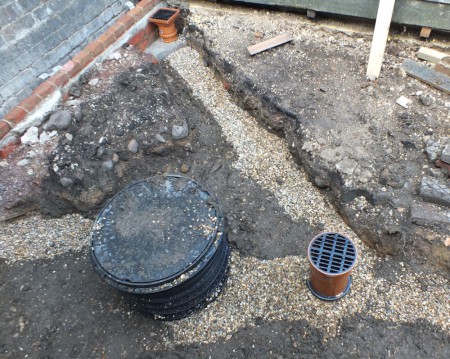 I’ve filled to about 3 inches below finished level.  I’m planning to surface using granite setts, but might decide to lay them later on once the outside wall of the kitchen is finished. 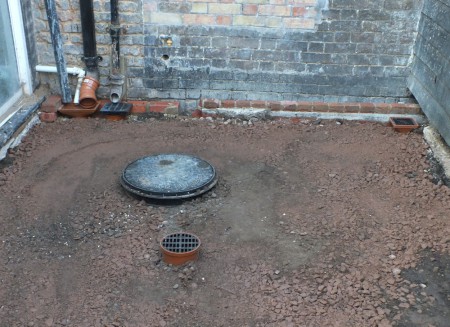 Sometimes it is difficult to see beyond what was there to start with.   Later I have other ideas for what I might start calling a courtyard, and I’m in the mood to have the finished level a few inches below the original level (which I set out to) so haven’t surfaced.   I think there is room to adjust the height of the drainage.