The Salutation has the impression of a smaller building in the north gable.   There are probably parts of the original timber framed building probably dating from around 1650, though it turns out very little of the current frame is in the same place as it was first assembled.

It has been hidden by render since before cameras were invented so we don’t have any photos to show what it was like. 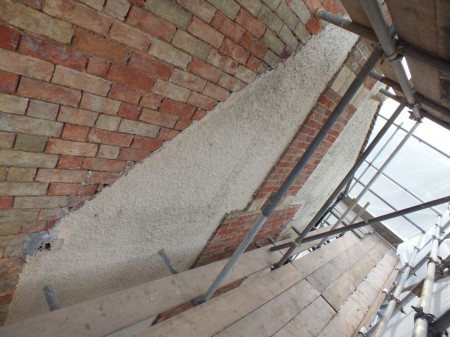 I had been tidying up the edges but tidied a bit too much and knocked some of the render off.   Underneath a lot of brown dust came out revealing wood in very poor condition.   A little more knocking and some of the original frame was exposed complete with wattle and daub infill panels on the first floor. (The frame has brick infill above and has been completely replaced with bricks on the ground floor).

Thee timber frame passes right through the chimney.  I think the frame was modified to accept a chimney which was added later.  Structurally it seems a poor idea to hold the chimney up with beetle infested wood. 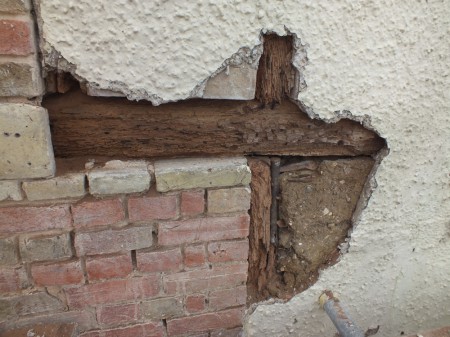 In for a penny, in for a pound.   It isn’t the neatest frame in the world and would probably never have been exposed.   The wattle and daub infill is flush with the frame and there is no sign of whitewash so it was probably rendered from new.

The earliest layer of render we found was lime on lath, but the Edwardians appear to have added a layer of cement render which prevented the wood from drying, then more recent muppets added waterproof paint. 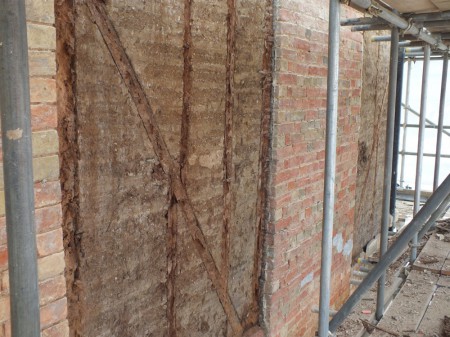 I haven’t uncovered the whole of the top of the frame yet as the render appears to be performing a structural role.  The other side of the frame can be seen in the attic photos. 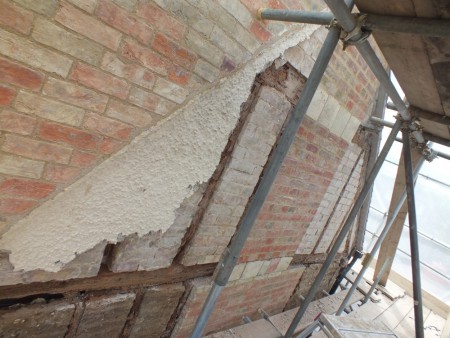 The whole frame is completely rotten (apart from a single post and the beam above the first floor which are merely half rotten).   The frame has been soaking wet for a very long time and a screwdriver can easily be poked all the way through any of the timbers.  The wattle has rotten away completely and the infill panels are loose.  There is very little that can be saved. 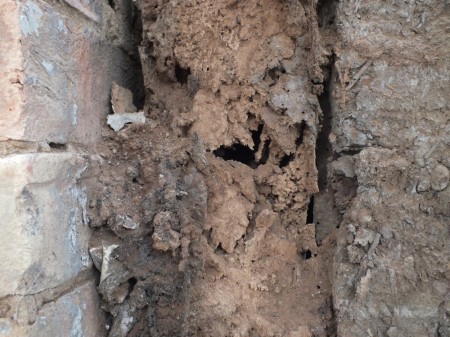 The frame has little structural importance as the rest of the house seems to have already learned not to rely upon it.   This is going to be one of those tricky decisions, and possibly an opportunity to tidy up the north wall which has long been very ugly.

Further examination of the frame reveals there is nothing left.  Even the solid looking timbers bend remarkably easily and can be poked away with a screwdriver.  Concrete block and render would be the quickest way to sort it, but I’m toying with the idea of dramatic reconstruction with the timber exposed. 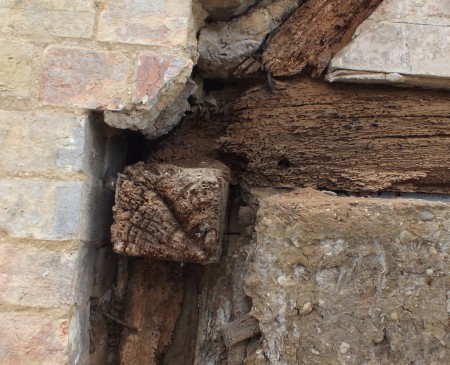