I’ve spent a week on the front of the house getting it ready for paint.  So far I’ve finished stripping the modern gloss paint from the wood and mostly sanded it, applied the final coat of render to the oriel window, and made a small repair to the timber frame just above the middle of the window.  The old timber was chiselled out at an angle so water doesn’t run into the joint. 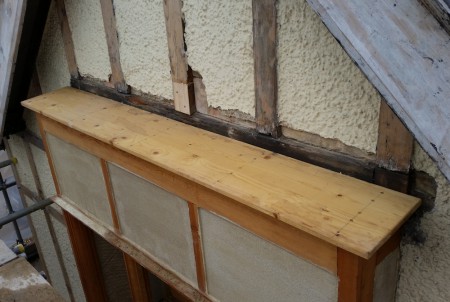 Gaps in the timber have been filled with linseed putty. The frame is far from perfect, but is generally sound. The wood will be finished in Linseed oil paint which doesn’t crack in the sun and is breathable unlike the modern gloss on the downstairs windows which needs stripping and repainting after only 2 years. 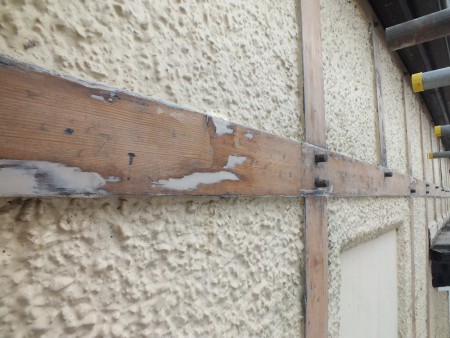 After 4 months boarded up the windows are just about back in place in the oriel window.  I used linseed putty which turns out to be easier than modern stuff when you get the hang of it, but time consuming to apply.  The glass looks very much older than 105 years, but I suppose that was the original intention. 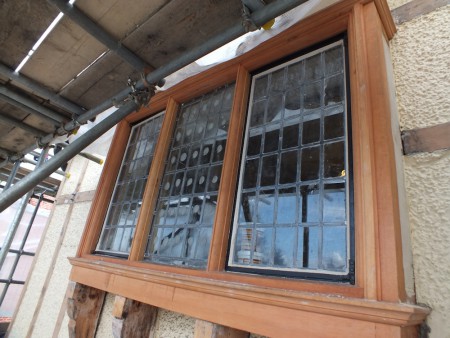 There used to be a big hole in the sole plate of the timber frame.  I think the pegs rot out, water gets into the peg hole, then after further years of neglect the frame rots.  For that reason I’ve replaced all of the broken pegs.   A piece of Edwardian softwood recovered from the attic made a perfect repair.  Angling the bottom and knocking it into place should provide good support for the post.

The silicone sealant between the frame and the plinth didn’t do the frame any good.   I’ve scraped out the damp loose stuff and filled the gap with lime mortar which should allow it to dry out. 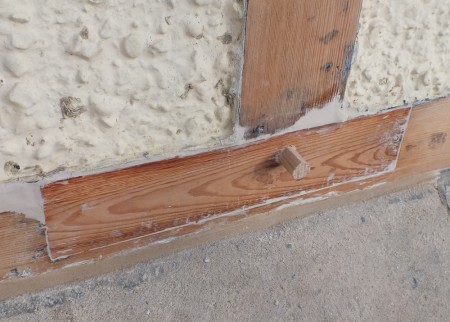 All of the various gaps have been filled with lime on the infill panels and linseed putty on the frame.  The strategy is to use breathable materials to keep the frame dry, and use them to seal gaps to keep water out in the first place.  The first coat of limewash will go on soon.

Following on from the last bay window post.  It seems a bit mad to be restoring Crittal windows in a building that isn’t listed and I don’t have to.   The reason is I like the faceted effect of the leaded glass and don’t want to replace it with double glazing.   I am under building regs instruction to improve thermal performance so will have to fit secondary glazing however I mount the leaded glass.

I’ve had the Crittall frames sandblasted.   BBS of Bedford did a super job.  Anyone planning to do this should first remove the handle first as it turns out to have brass fittings under the caked on paint.  The hinges are also brass. 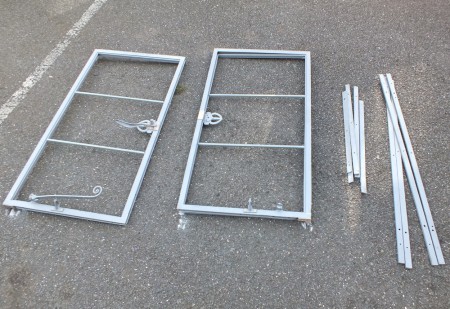 The windows have a fascinating construction.  The frames themselves are brazed together, then the brass hinges are screwed on, then the bars to the right of the photo which create a flat external mounting face screwed from the inside of the frame.

The frames weren’t that bad – only the bottom rails were starting to get a bit thin in places. 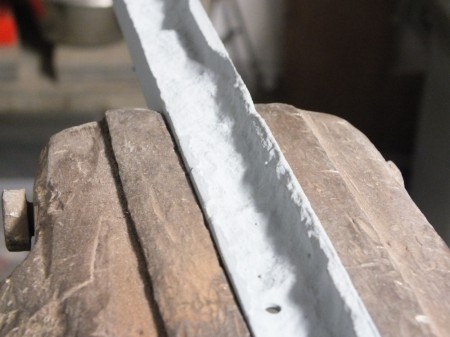 The frames from 1910 are mild steel so can be welded.  I built up the edges with MIG then ground down to create the original profile. I think the edges need to be welded as they will be sensitive to knocks, but everything else can be done in car bodyfiller.

I’m using Bilt Hamber Electrox primer which is 90% zinc by weight.  I keep nearly dropping the pot as it is unreasonably heavy.  It offers some cold galvanising protection which I have found to be very effective on previous car projects, but it does need the shot blasted surface to stick well. 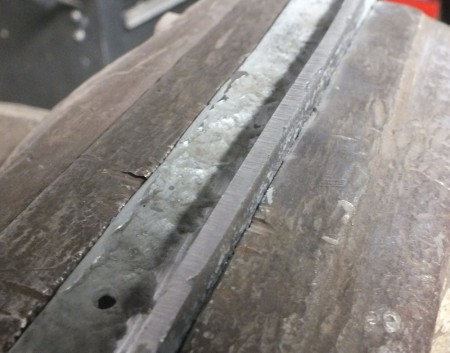 The screws holding the windows together are 1/4 inch Whitworth.I bought some old stock screws from eBay still sealed in 1945 packaging.   Some had become a little rusty but there were enough good ones for what I needed. 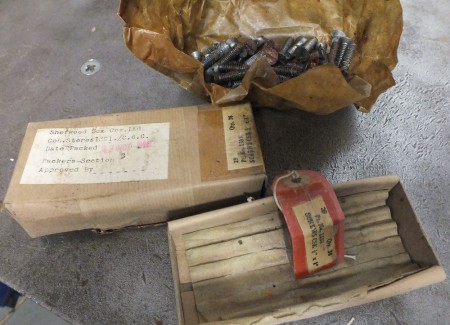 The leaded glass was rebuilt by Fraser of Tempsford Stained Glass who did a fantastic job.  Most of the edging needed to be replaced, a couple of glass panes were changed, and he soldered in some new wire ties to attach to the glazing bars. 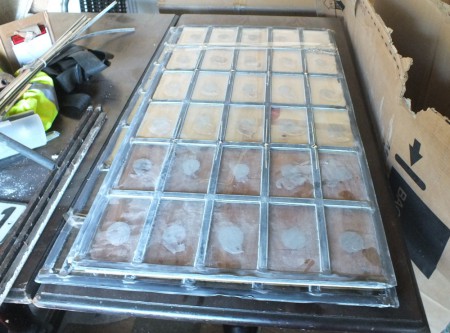 The frames and glass are going up to Sheffield and a replica wooden frame and bay window timbers will be built around them. (Because I liked the original frame profile too.)

The handles and catches are nice too, but I was missing one of each.  Rather than do any lime on the hottest July day on record I’ve started to make up some new ones. The handle isn’t finished yet but I’ve done the tricky bit. 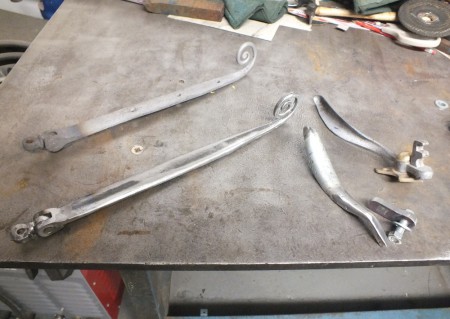 Later here is the (nearly) finished handle.   I’m quite pleased with it. 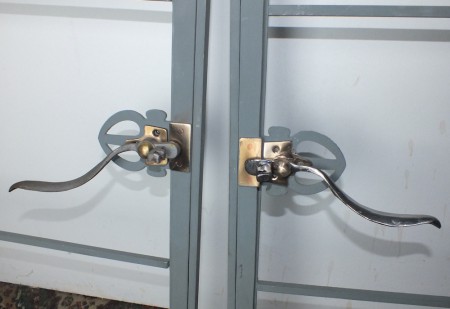 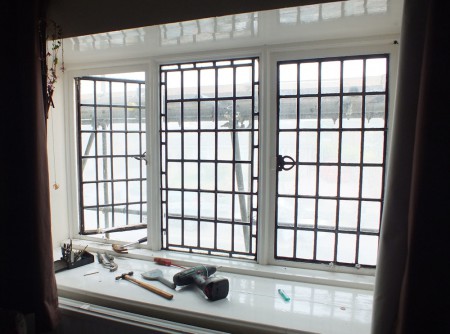 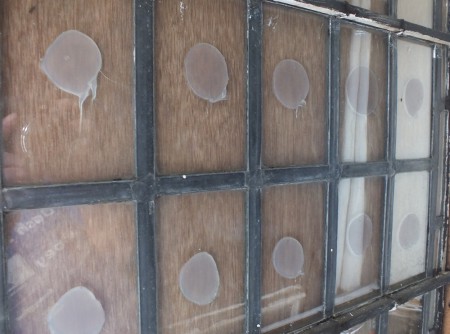 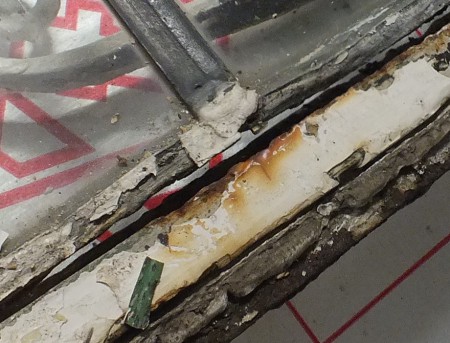 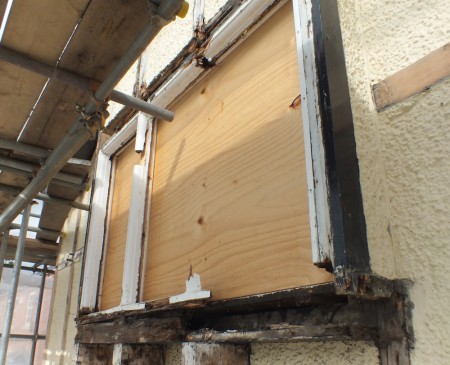 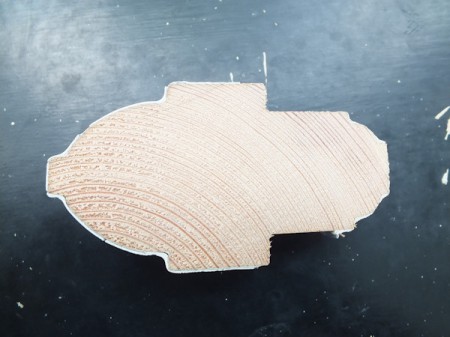