I love mock tudor as much as the next person, but I think sometimes it can be taken a little too far. 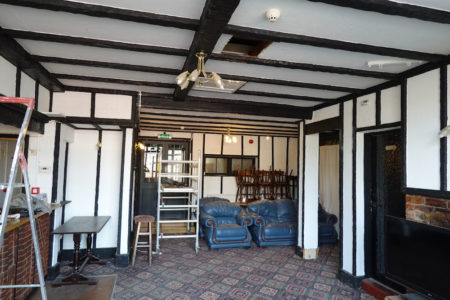 Above the ceiling in the foreground is a well preserved 1920s vaulted ceiling and I’ve been careful to avoid running any services in there just in case I wanted to expose it again.    Exposing the original 1920s ceiling (as well as finding a slightly different balance for the mock tudor) is my plan for the next couple of weeks.

I’ve realised it will be a super project to keep me sane during the lockdown. 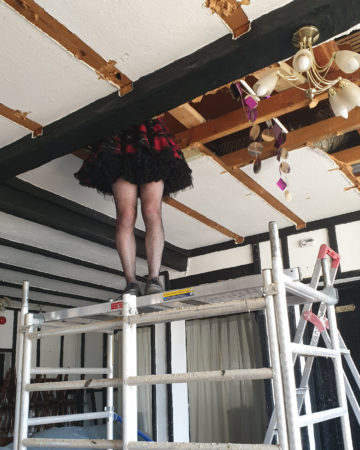 I’ve been unpicking the ceiling bit by bit.  It has been easy as the ceiling is nailed together and I have a crowbar and a big hammer.  With the boarding gone it is easy to see what is structural and in what order everything comes apart.

I had been a bit worried about the big beams which are made from 2 lengths of 6×2 pine nailed together so are quite heavy.    Chopping them in half then lowering them on rope worked really well and was safer than it looks in the photo!    Better to have no help as I wasn’t worrying about where anyone else was standing so could concentrate on me. 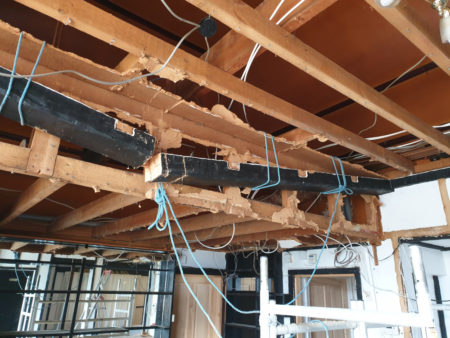 The main ceiling construction was nailed outwards at each end.    I found the most convenient method of removing the joists was cutting through one end with a reciprocating saw, then crowbar the joists from the central support.   Once those nails got to the end of their travel the joists started a slow and gentle fall to the gound with very little assistance and by the time they got to the ground they had extracted the nails at the other end by themselves.

Some bits will have to stay in place for now to support pipes and lighting.    Normally I have a tidy at the end of the day but removing the ceiling was exhausting so I’ll tidy tomorrow. 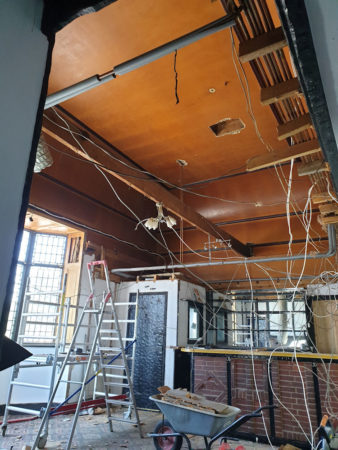 It is very dark in there now.    I think the ceiling was once white but hasn’t been painted since 1920.   Pub tobacco smoke has caused it to darken.   A huge chandelier or two will hopefully brighten it up a bit.

I’ve had a sweep up and will get on with something else until I can get plumbers and electricians around to let me finish the ceiling.   I’m turning my attention to considering what sort of floor would be nice in a ballroom.   Of course the first photos that popped up were the Palace of Versailles and that was good inspiration.   I’m thinking more parquet.