I’ve not posted much for a week as I’ve been doing boring stuff, mostly pointing.  I want to get most of the scaffolding down soon and it’s mostly pointing holding that up.  I can manage about two square metres a day of pointing when it’s just wall, but tidying up 20th century bodging (cement or carnage from the boiler installing muppet) slows progress,

Today I was sorting out Georgian bodging and a loose arch above the north window. It is a very shallow arch and the pointing had eroded badly on the vertical joins causing it to come loose. 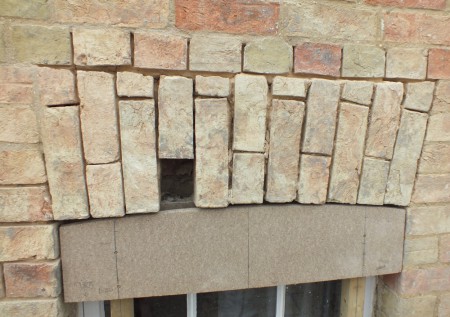 The wood board is a former for the new arch supported from the window sill by 2×2.   It’s set at a lower level to catch any bricks that might fall when I remove the arch.  After raising I screwed it to the window frame to hold it in place.

I did a trial fit of the bricks to figure out the spacing, then marked the joint positions on the board to make sure I had enough room for a brick when I got to the middle. 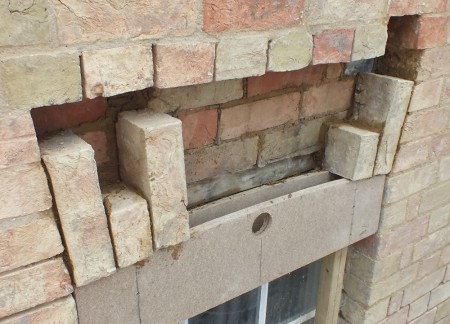 The arch only really holds itself up.  There is a wooden lintel holding up the inner wall, then a course of header bricks bridging over the arch to help support the outer wall.

The joints are tight at the bottom of the arch.  I built the arch with a finer sharp sand and have recessed the joints a little to allow pointing with sand that matches the rest of the gable. 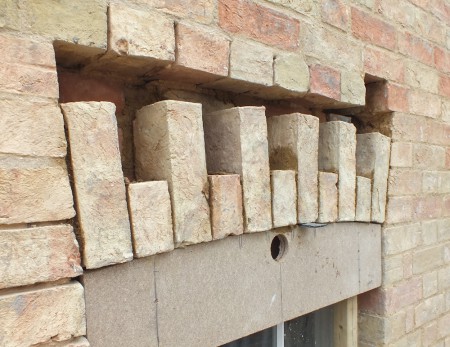 The arch is finished bar pointing.  Another photo soon unless the wall falls down or I get distracted and start doing something else.

Several weeks later it looks like it has always been there.   I’ve also replaced the silicone sealant around the window with lime mortar, though I will also need to replace the window with a sash for building regs fire egress. 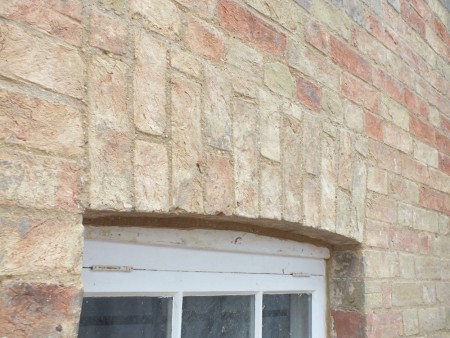